Pete's Walks - About my walks

When I moved back to Kensworth in early 2005, after nearly 30 years away, I was pleasantly surprised at the number of long-distance footpaths that were close to hand - one of the OS maps for the district showed 12 of them, and it was out of date as I know of at least two more in that area!  There must be at least 20 long-distance paths, some only 20-30 miles long, others 100 miles or more, that pass within a few miles of my home. In May 2005, I walked my first section of the Chiltern Way and was quickly hooked. Over the coming months and years I intend to walk as many of these paths as possible, and the journals on this web site will record my progress.

I intend to walk most of these local long-distance paths as a series of day walks, doing two or three walks a week, rather than a continuous 'day in, day out' journey.  I may however do some of the shorter walks in one go, such as the three successive days in which I walked the South Bucks Way. Obviously, when I go away on an organised holiday to walk a long-distance path (such as the Cumbria Way), that will also be a continuous walk.

For these 'local' long-distance paths (by 'local' I mean where all of the path is within about an hour's drive of my home), I will drive to and from the start of the walk, returning home at the end of the walk. I will normally walk about 15 miles each day, as I have found that that is the distance I like to walk in a day, taking about 5 hours including stops.

Looking back along the Hertfordshire Way, between Great Gaddesden and Little Gaddesden

Except for when I go on organised holidays (e.g. the Cumbria Way), I generally walk by myself. I prefer this for several reasons - I can walk at my own pace and stop when and where I want to, and I see much more in the way of wildlife as I cause less disturbance by myself. However, this does pose a problem with transport when walking a long distance path - with a friend or friends, we could arrange to leave a car at each end of the day's walk (as indeed, some of us did a few years ago when walking the Suffolk Coast and Heath's Path - we really must get round to doing the last stretch from Southwold to Lowestoft!). Generally, it is not feasible to make use of public transport as the walks go to very remote places with few if any buses (and I would need to use two or three bus routes to get back to my start point). So I have decided to solve the transport problem by doing the walks 'both ways' -  parking my car near where I last finished the walk, following the route for about 71/2 miles and then turning round and retracing my footsteps. This means that the walks take twice as long and I walk twice as far, but I get to see the scenery in both directions, it's twice the challenge and is twice the fun!

I would also like to walk long-distance paths that are further afield, e.g. the West Highland Way or the Offa's Dyke Path. Unfortunately, I have had problems with my back in recent years which means that I can't really carry a heavy rucksack on my back. A normal 'daysack' is fine, but when I try adding the extra clothes, wash gear, maps/guides, etc., that I would need to take on a continuous end-to-end walk, the extra weight puts a strain on my back. Having once been unable to do any mountain walking for over three years because of my bad back, the last thing I want is to damage it again. So I am restricted to doing these walks either with a holiday company (such as HF Holidays, with whom I've walked the Cumbria Way and the Dales Way) or else by using one of those companies that transport your luggage for you - I've not tried this yet, as it seems a somewhat expensive option for a single person. 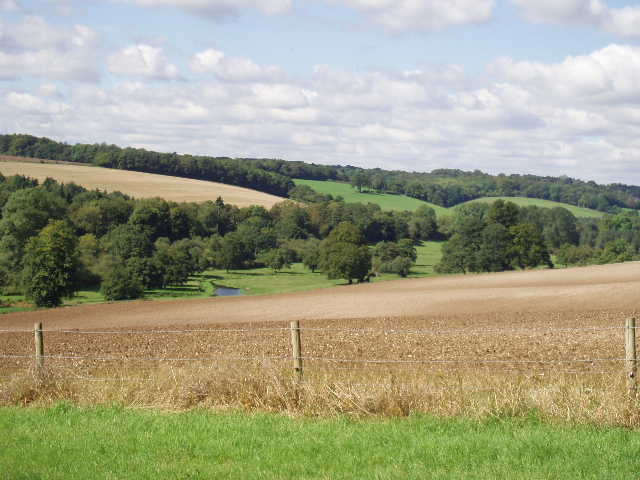 The Chess Valley,  as seen on Day 1 of the Chiltern Heritage Trail